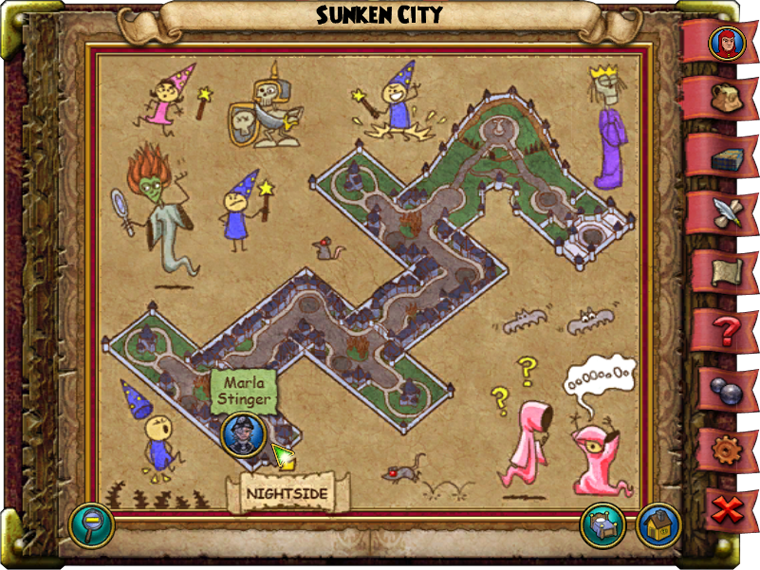 Sunken City is considered the most difficult instance in Wizard City. Instead of the normal ratios of one player to one opponent or one player to two opponents, the ratio will be one player to three opponents and more than one player to 4 opponents. Four people can be in this instance, and that number is highly recommended to avoid frustration.

A key factor in beating Sunken City is to avoid battles that are not necessary, and to have all players fighting in any battles that occur. Without unity, players will likely be defeated and if all the players are defeated at the same time, they will be forced to restart.

Stay as far away from the road as possible and don't think the game is glitched when drawn into battles; there are two or three almost unavoidable battles (other than the bosses) throughout the dungeon. The road battles can be avoided if extremely careful. So don't come in, novices! Additionally, this area has an house statue (reward from the main boss, Grubb) and requires 750 crowns to unlock!

Marla will change places as you do the dungeon quests

This Tower is similar to a gauntlet in that there are multiple levels you have to defeat before facing the Boss. Unlike a gauntlet, however, you can still leave to refill your health and mana without it resetting.

2 health and mana wisps. Be careful as they DO NOT regenerate.

Grubb
Two (2) Living Scarecrows
Please note that since the monsters can only outnumber the players by 2, you may need a second person to get Grubb to enter the battle.

Retrieved from "https://wizard101.fandom.com/wiki/Sunken_City?oldid=163485"
Community content is available under CC-BY-SA unless otherwise noted.