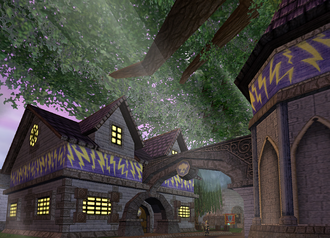 There are no creatures here, this is a neutral location, meaning you will regain health over time spent here. The only creature there is Halston Balestrom, if you assume his frog status, and the typhoon krakens that you fight in the storm tower.

Storm Magic is all about creativity. It represents that flash of insight, or the spark of inspiration that makes you yell, "Eureka!" It is about the pleasure of catching lightning in a bottle.  Wizards that embrace the School of Storms, known as Diviners, are driven by the thrill of investigation and discovery, the joys of invention and ingenuity, the power of creating and building. The drawback to such pursuits is the tendency to get lost in the maze of thoughts and being paralyzed to make a decision. Diviners use Verses to charm, enthrall or hypnotize creatures to help them.

The Storm School will train its student wizards to do a lot of damage. Storm Wizards have the ability to unleash high amounts of damage from an early level, which is good, but they place too much emphasis on power, and therefore suffer in terms of accuracy. They also have the least amount base health points of any of the schools. When enemies cast damage buffs on themselves or damage reducers on a friendly player, storm wizards can remove those spells.

Before time as we know it, there existed the Tritons. They shared the universe with the Dragons and Giants. The Tritons ruled the seas and kept peace in the world, that is, until the Dragons and Giants began to scheme. When the attack happened, the Tritons were ready. They refused to fully destroy their enemy and so, fell into slumber as their price for mercy. The Tritons will awaken one day and only The Diviners can stop them.

Today, the Storm elements still exist. Even now the more potent Storm Magic holds Fire and Ice at bay.... Under the guidance of Professor Halston Balestrom, great reforms have been made, formalizing many spells. The colors chosen for Diviner's are purple and yellow, while the Amethyst has been adopted as the gemstone of the School.

Retrieved from "https://wizard101.fandom.com/wiki/School_of_Storm?oldid=165655"
Community content is available under CC-BY-SA unless otherwise noted.