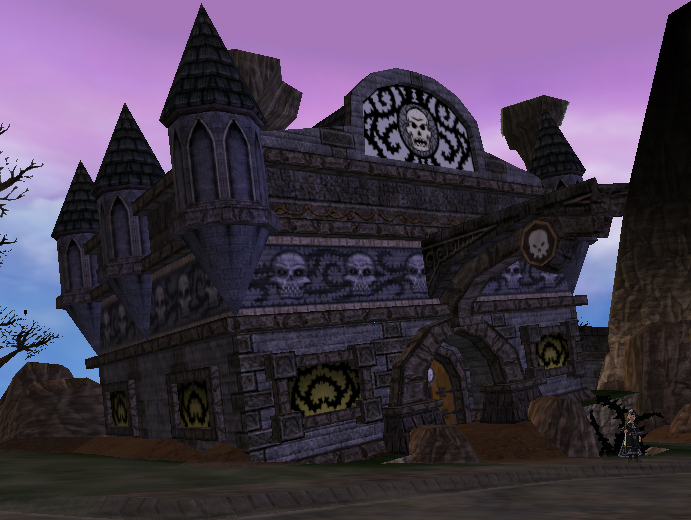 The Death School spells tend to be more complex than those of other schools, with most spells requiring combinations to work effectively.

Spells are strong if used with blades and traps. Many of the attack spells absorb health from the enemy and heal the caster. Also, Necromancers potentially have the most powerful minion in the game (see Animate). There are many preparatory spells that allow them to build up high-damage spells. This is the only school with every type of spell, except those that affect all friends. They have life-stealing, healing (with self-damage), minions (including minion buffs), regular, damage over time, and affects all enemies.However, it just doesn't have what Myth has, which is Double Hit. Death Wizards have above average accuracy on level with balance (85%), but just below life (90%).

According to the book in the School of Death...

Death is finality, the study of the corporeal. Practitioners of the Death Art, known as Necromancers, understand this limitation and strive to face it unafraid. Death's power comes from the removing of order from the universe at large. Withdrawing the power of order and allowing chaos to return instills Necromancers to bend magic to their will. Necromancers draw on the power of courage to channel their own fears out of themselves and at their adversaries. Death sits between Ice and Storm, for the cold energy of undeath lies between those two forces. Onyx is the gemstone of Death, while black and gray are the school's other colors.

Malistaire, former Death professor and antagonist of the game, is no longer teaching students; in fact, he is responsible for the corruption of nearly every monster in the game. When his wife, Sylvia Drake (former Life professor) died, he became so angry that he crashed the Death School into Nightside, where it miraculously survived and still remains. He is also twin brother of Cyrus Drake, Myth School Professor.

Community content is available under CC-BY-SA unless otherwise noted.
Advertisement