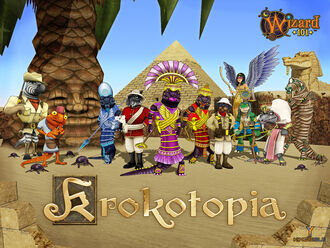 Krokotopia is an ancient land of forgotten treasures. In this place, deserts surround the life-giving oasis in the shadow of towering pyramids. Krokotopia was once home to the Kroks, and it is rumored the Kroks have re-awakened and enslaved the Manders. Occasionally, the canines of Marleybone can be seen here excavating ruins in search of artifacts for their museums.

The history of Krokotopia is unclear, but it would seem as though the Kroks were the first inhabitants of Krokotopia, and left, most likely not by choice, for reasons unknown, the great structures they built falling into disrepair over time. Krokotopia was then populated by the Manders, but when the Kroks returned in a dire condition, they took advantage of the Mander's hospitality and enslaved them, much to the horror of a small group of still benevolent Kroks, who formed the Order of the Fang and wrote the Krokonomicon, using its extreme power, the Golden Fang, and the newly created Balance Magic to put the majority of the Kroks, called the Tuts, into a Great Sleep. Centuries later, Professor Winthrop's archeological team arrived from Marleybone to excavate the Pyramid of the Sun, and, in doing so, accidentally awoke the Tuts, who quickly re-enslaved the Manders and took over once more. To make matters worse, Malistaire has arrived in Krokotopia, and is trying to gain admission into the Order of the Fang so as to steal the Krokonomicon.

Krokotopia can only be accessed with a membership or by being purchased with crowns. 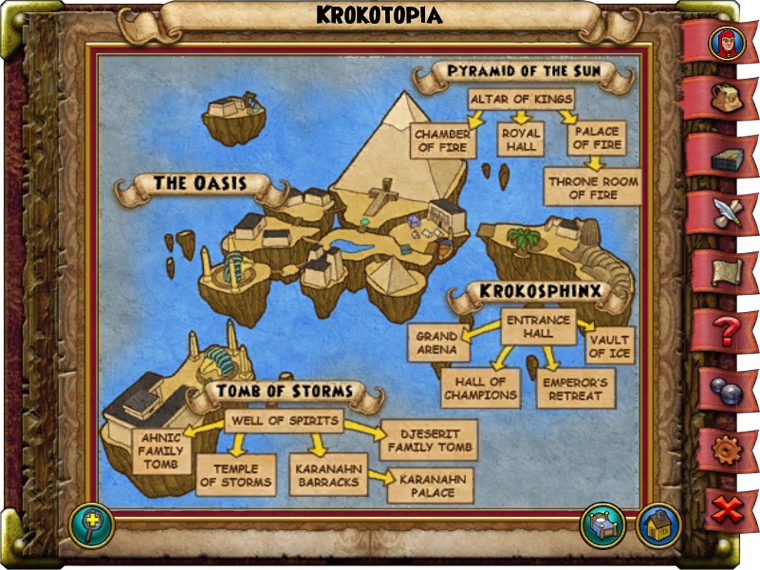 Red: Order of Fire (Pyramid of the Sun)

Retrieved from "https://wizard101.fandom.com/wiki/Krokotopia?oldid=164881"
Community content is available under CC-BY-SA unless otherwise noted.