Long ago, the Astral Wizards of Celestia created powerful magic using the energy of the stars, the moon, and the sun. The sorceress Morganthe, a Queen of the Shadow Web, wanted the secrets of the Celestian magic at all costs. The Celestians refused her, so she raised a dark army and sent it against Celestia. After decades of battle, the Astral Wizards realized their world would fall. They summoned the Storm Titan to defeat Morganthe's legions and to take their world to a place of safety.

But the titan betrayed the Celestians by sinking their world beneath the waves along with Morganthe's invading forces. Realizing they were doomed, the Celestians raised mighty domes to protect some of their treasured city from the waves, though it was too late! They perished along with Morganthe's invading army. Celestia was lost to the Spiral, its Spiral Door closed forever.

Centuries later, a new spiral door opened to a deep underwater world and was forced to be sealed. A team of brave explorers from the Spiral Geographic Society, led by Sir Thurston Plunkett, re-discovered Celestia. They landed with an air-ship and built exploratory undersea domes to explore Celestia's ruins. Plunkett and his fellow explorers soon realized that Celestia was now inhabited by a strange new culture... the Crustacean Empire. Unfortunately, the explorers did not come alone to Celestia. Morganthe's followers, the Shadow Weavers, stand ready to take Celestia's magic for their queen.

After receiving the Spiral Geographic Society's distress call, headmaster Merle Ambrose of the Ravenwood School for Magic seeks any young wizards brave enough to journey to the undersea world of Celestia and discover the secrets of its lost magic.

To enter Celestia you need to complete The Final Countdown in Dragonspyre. you will get a message from Merle Ambrose telling that you can now go to Celestia, although, when the world of Celestia re-entered the spiral, it was only destined for the strongest players to continue on to help save and defend it. You have to be level 48 or higher to enter the underwater world of Celestia. 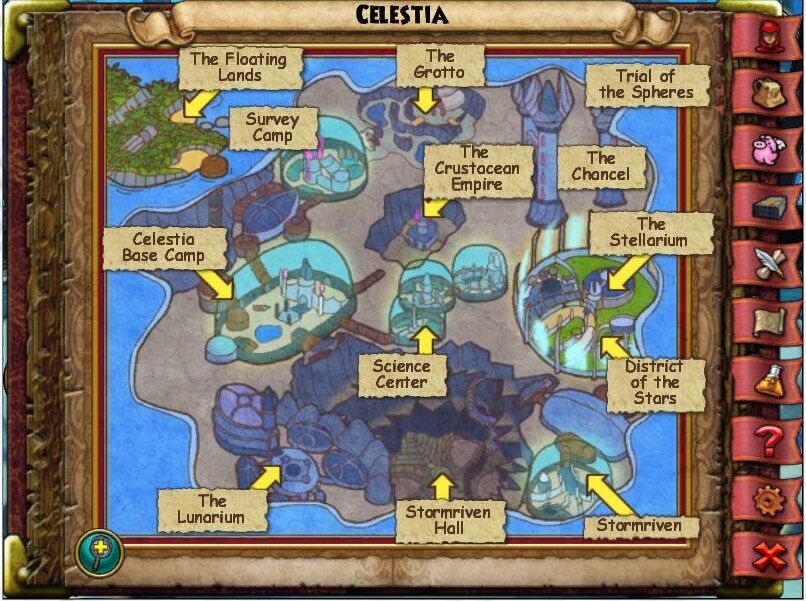 Retrieved from "https://wizard101.fandom.com/wiki/Celestia?oldid=166355"
Community content is available under CC-BY-SA unless otherwise noted.